I was talking to the admin who belonged to a Canadian Muslim-only Women Empowerment WhatsApp group—I am not sharing the name of the group not because I am afraid of them but because I don’t want them to be targeted since a lot of other Muslims are using their services. I posted about how I am using lucid dreams to visualize the future and that I would like to teach this. Pretty soon, the admin (a Muslim woman) texted me and said that only God can see the future, which implied that what I was saying was definitely wrong. I felt very annoyed at this comment so I texted her back and shared an amazing article about how it is possible to see the future (to some extent) with the help of lucid dreaming. But, she seemed to ignore me so I could not explain things in detail; then she said that she will talk to the other admins about this. Eventually, they decided that this kind of post is outside of what Islam is teaching and that I should not be posting this there. I felt very baffled with their decision! As a result, I left most of the WhatsApp groups that were being run by this organization—I even left the ones related to job hunt. I felt that they were not going to listen to me even if I were to tell them in detail that Lucid Dreaming is actually halal and that great thinkers like Prophet Joseph, Prophet Mohammad, and Ibn Sina (Avicenna) were also lucid dreamers. I started breathing better as soon as I got rid of these groups.

I am active on Twitter; and, there have been times when certain users have said certain things that don’t make any sense. One of the users once commented that there are no great Muslims anymore; if you think they are around, then why are there not many of them with prestigious awards like the Nobel Prize? Of course! one reason is that mostly Muslims are being oppressed all across the globe. However, there is a second reason for this: Muslims are not following Islam although they profess that they do. My communication with this particular admin reminded me of this fact. This is how Muslims are fighting with each other. What she did is what a woman abuser does! When I said that I am finding her commentary threatening in nature, she dismissed me and said that this was not meant to be a threat; the admins then talked to each other without involving me in the discussion although their conversation was about me; nobody ever replied to any of my messages regarding the Islamic teachings that I shared. Obviously, this sounded super-dumb and scandalous to me! Did they really have a good look at the hadith about dreams as well as scientific literature? They sounded so arrogant to me!

Below is the hadith (Prophet Mohammad’s saying) about dreams.

The Messenger of Allah (صلي الله عليه وسلم) said: “The Pen is lifted from three (i.e., their deeds are not recorded):

There are many other things about some of the Muslims that do not make any sense to me, which is why I have always stayed at a distance from such people. I know a couple of Muslims who are pretty broad-minded  and practising—my best friend is a Muslim woman who is also a lucid dreamer like me.

I am happy that I have learned to react strongly to such neglect and mistreatment. I do not have the final set of conversation where she asked me to delete another post after which I left this WhatsApp group; but, I am still proud of the fact that I saved the original chat. 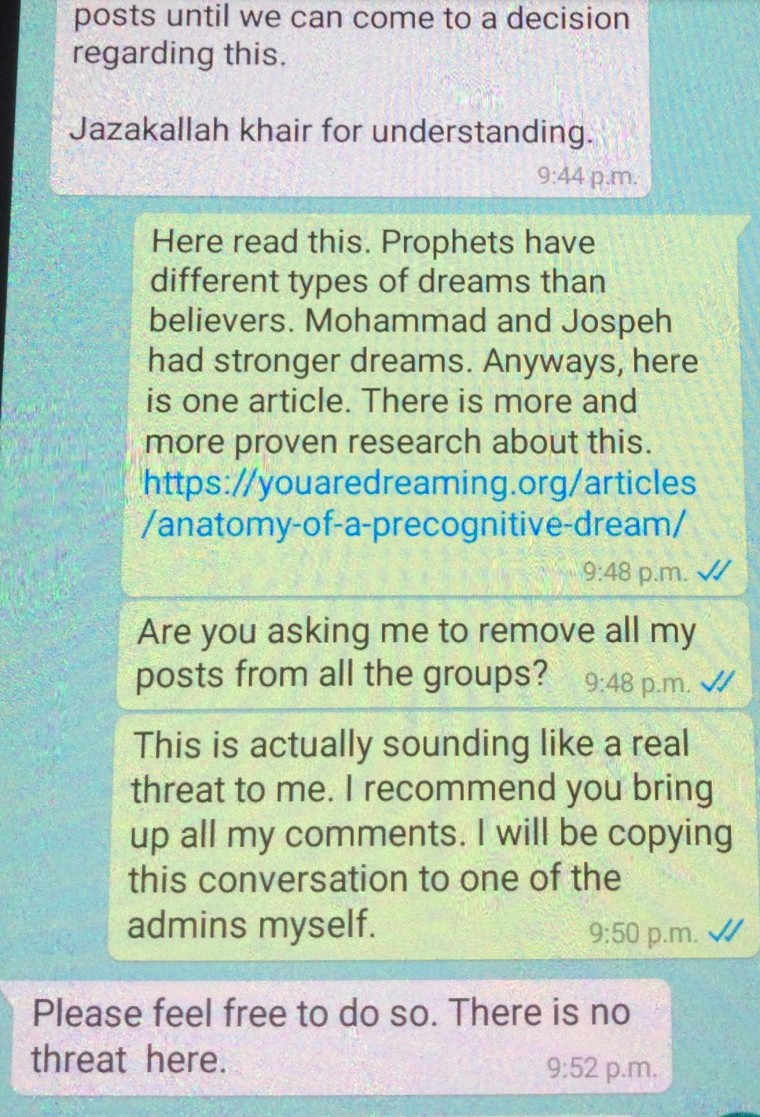 Another time I reacted this well was when I was reading about Interfaith marriages. Read “My Thoughts On Interfaith Marriage. I found it really funny that some “male” scholars believed that Muslim men may marry a Christian or Jew women but Muslim women cannot do this because the children that are born from such women might not stay Muslims. Its rather absurd that these scholars were saying this when Quran says that there is no compulsion in religion. Its very easy to see that these male scholars are thinking of having more for the Muslim men and less for the Muslim women; i.e. they are controlling in nature.

I feel that Canadian Muslim women face many barriers that are being created by some members of the Canadian Muslim community. I know that many Muslim men can get away with saying lots of things but Muslim women cannot. I know that lots of Muslims still believe that the Muslim women should only marry Muslim men—some of my relatives believe this too. Muslims need to heal because they are being oppressed a lot nowadays. But, look at this woman’s reaction to lucid dreaming, which is used in the healing process. Its very clear now why there are less smart Muslims left!

Attending Ottawa Inshallah's Artist Meet and Greet. This project is run by artist Aquil Virani. My poem "Open Letter to Climate Change Activists" has been published http://aquil.ca/ottawainshallah/ #OttawaInshallah, #AquilVirani, #ClimateChange
My poem about Climate Change is published in the anthology "Ottawa Inshallah". This anthology is a project of artist Aquil Virani. Get your copy! Visit this site to learn more about this project: http://ottawainshallah.ca #ClimateChange, #OttawaInshallah, @aquilvirani
A Vision About The Children
Gazing Inside Mother’s Womb Through Lucid Dreams
Lucid Dreamers can hear you like no one else can. For instance, sometimes I wake up and find out that I am in the same mood as one of my inspirations. For instance, I am thinking of watching an inspiring video online and he/she has just tweeted an inspiring poem. There are several more such instances. #LucidDreamers, #LucidDreams, #Creativity
Sword of Theseus